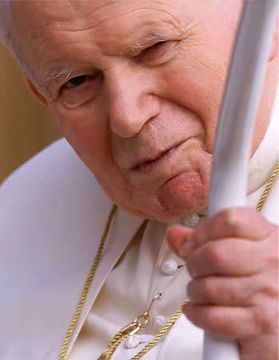 Hi, I'm in Neenah now...working at Jewelers Mutual Insurance. Working had been nice lately, probably because of the weather is also nice. It's sunny and bright today. The first time in more than 5 months that I went out without any coat or jacket. We had lunch at KFC today, and my friend Russ, the big tall guy, ordered the Snackers meal and he found out that the sandwich is super small. He's kinda dissapointed, and he said he better ordered 4 snackers instead of having the meal. I had the crispy chicken wrap, and it's quite good.

Pope passed away on Saturday, right after I wrote my last entry. I cried when I heard the news, and couldn't bear the sadness of losing him. I felt like an orphan... more like losing two father. First is my daddy, and second is the Pope. He is the greatest man on earth, passing every boundary in racism, culture, and religion. 2 million people are predicted to attend his funeral. Even Prince Charles moved his wedding day from Friday to Saturday to attend his funeral. The sad thing is my president SBY will not come. Indonesia will be represented by Minister Alwi Shihab...It's embarassing considering other countries sent their prime people, including the US. Presiden Bush will also be in Vatican on Friday. I wish I have the power to open a magic door to Vatican.

Good Bye Pope, you are the greatest man on earth. God is ready to welcome you to His kingdom.
Posted by Leony at 10:00 AM